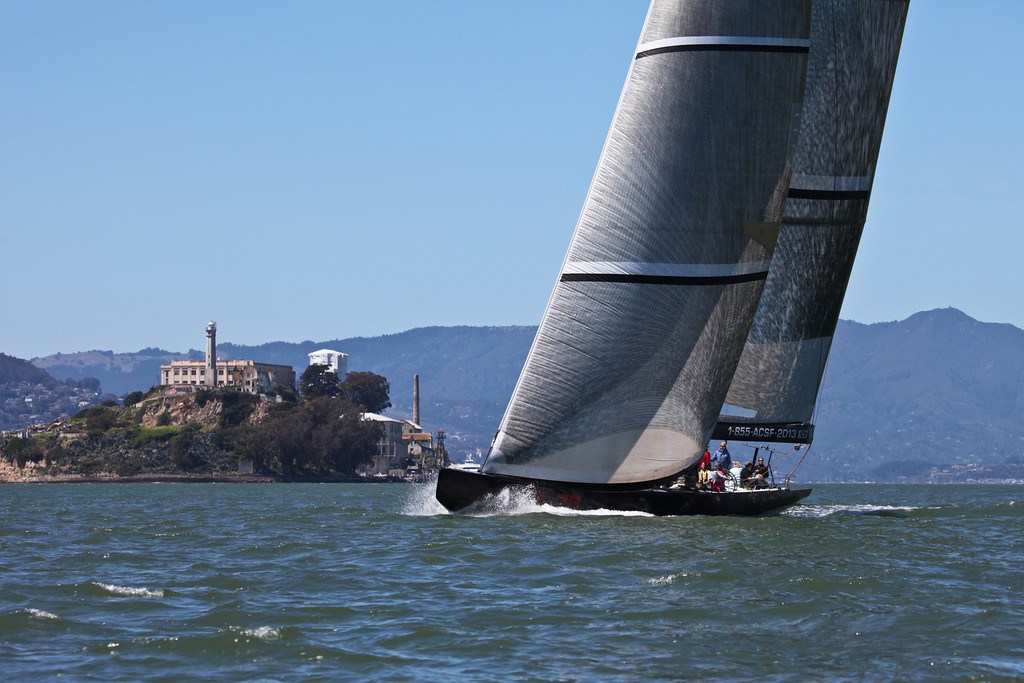 “Over there is where the starting line was. These conditions are the same today – about 10 to 15 knots of breeze and the tide is flooding under the Golden Gate Bridge.”

We’ve just motored out from Pier 39, leaving behind a hectic world of restaurants, souvenir shops and performers, to take to the bay for some America’s Cup sailing action. 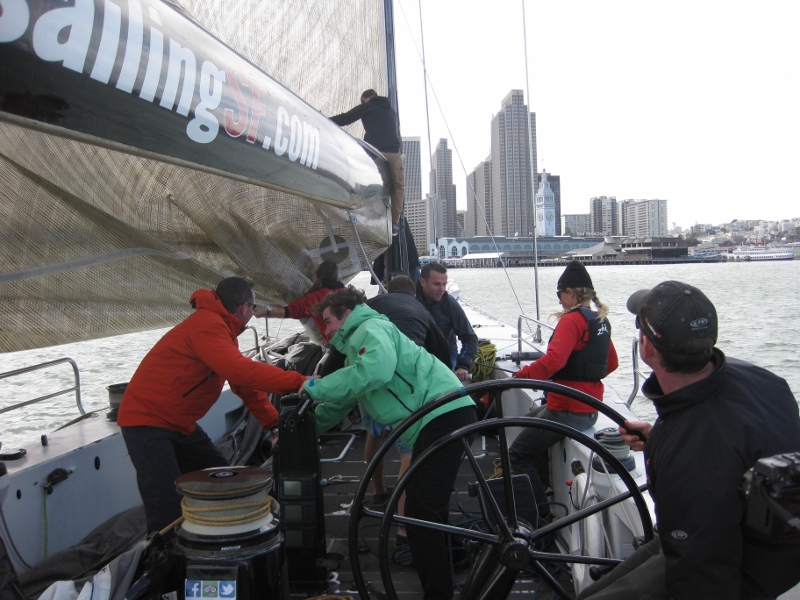 Leaving the dock wasn’t without its own performance though – when we set off from Pier 39 just moments before, a crew member had to chase two large fat sea lions off the pontoon in order to untie the boat’s stern rope. The sea lions barked loudly in protest at being disturbed from their slumber, and slowly plopped into the water, swimming away while still barking at us in disgust.

On board USA 76, along the deck is a fat, grey sailbag nearly running the full length of the boat, and there are four coffee-grinder winches, used to hoist the sails up the mast. Jon asks for volunteers to pull up the sail. The mast is 115 feet high and the sail looks huge (I find out later that it’s 2,800 feet in area) so I decide to leave the strenuous winch-grinding to the others… 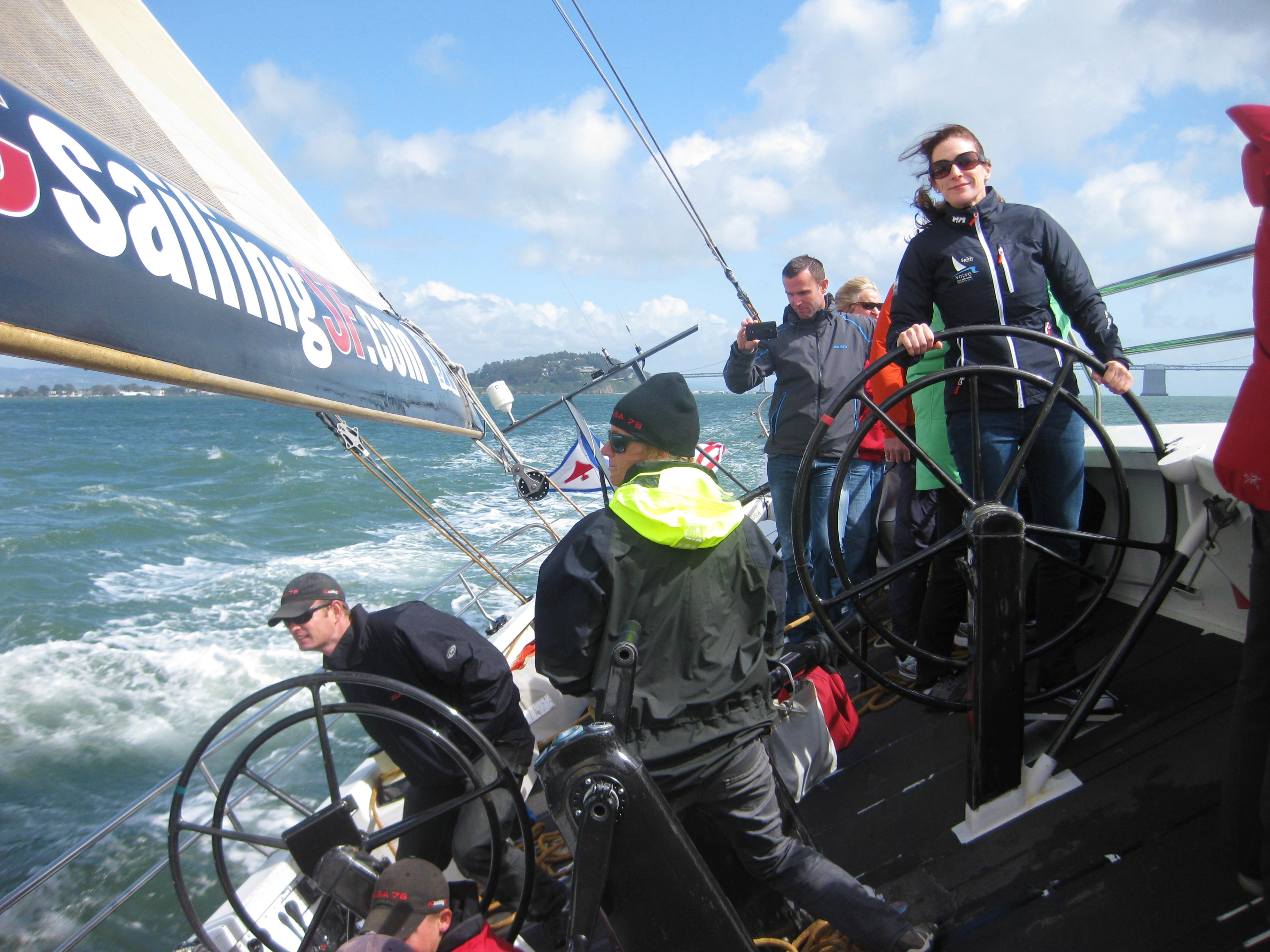 The 84-foot long America’s Cup yacht USA 76 was used by the Oracle Racing team in their 2003 America’s Cup challenge in New Zealand. Oracle came up against Team Alinghi in the final. Alinghi won the cup, but in September of that year Oracle won a thrilling rematch against Alinghi in San Francisco Bay.

The yacht retired from racing three years ago and is now available for public day trips and private charters, with some slight modifications. “Very few changes were made,” says Jon. “We added the engine below, and rails on the side.”

The boat is still a basic racing boat – light and fast. There’s no cabin, galley (kitchen) or heads (toilet) and although guests can get involved in hoisting and trimming the sails, we are warned not to hold onto any lines while crossing the boat – on a racing yacht of this size, loads are huge.

Jon – who has an impressive sailing pedigree himself, with stints on board Stars and Stripes (USA-34) and Abracadabra (USA-54) as well as on polar ice-breaking ships – is on hand to answer questions, and he tells us that the yacht is the most recent America’s Cup boat available to the public.

Jon hands over the wheel to me, and it’s thrilling sailing towards Alcatraz Island and then tacking for the Golden Gate Bridge while at the helm of such a powerful racing yacht. It’s lighter and more responsive on the helm than I expect, feeling more like a dinghy than an 84-footer.

We sail upwind towards the Golden Gate Bridge and then sail under it, out towards the Pacific Ocean, taking turns on the helm. As a dark cloud looms towards us, we gybe back 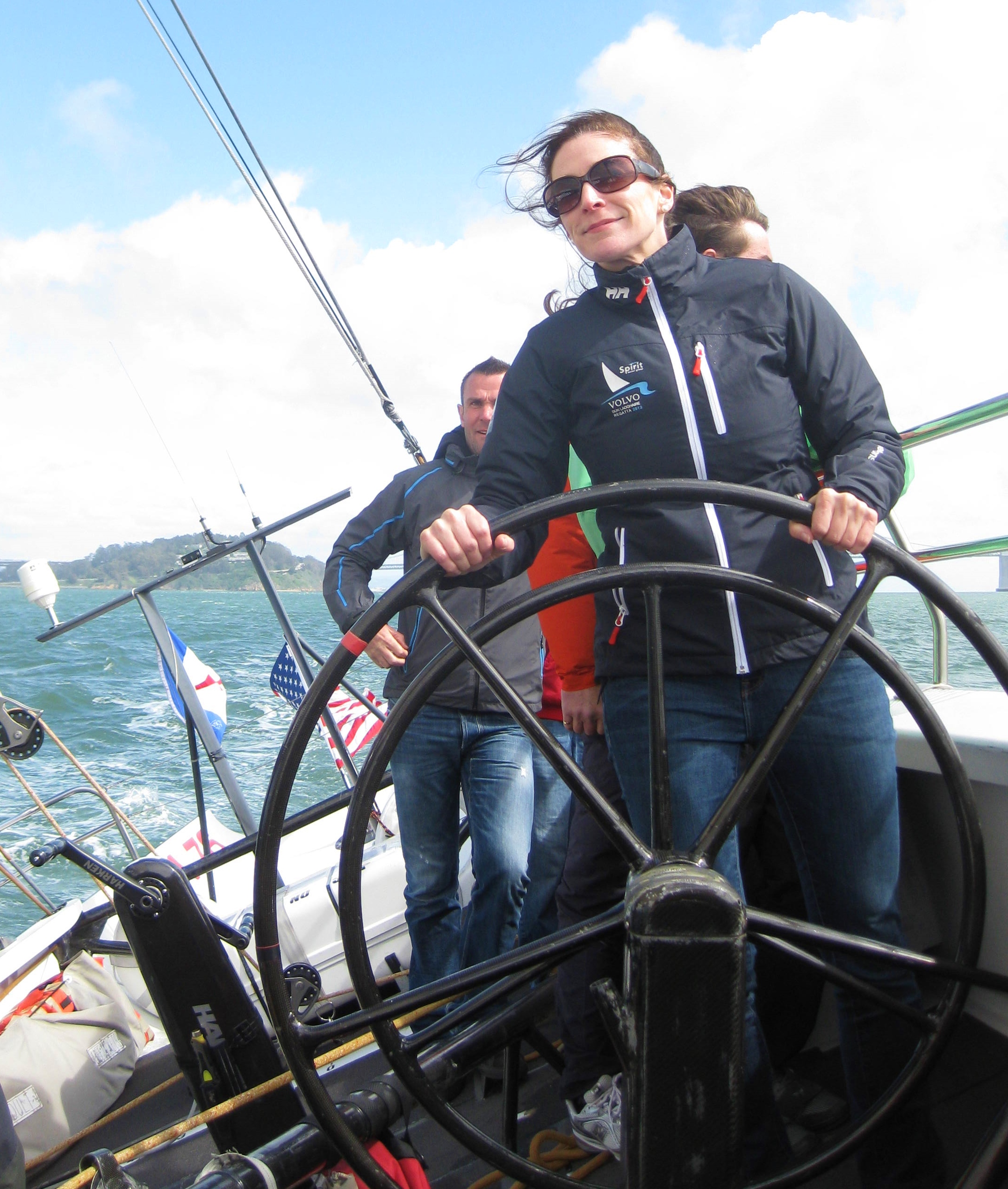 towards the Golden Gate bridge and sail downwind towards the Oakland Bay Bridge on the other side of the bay.

USA 76 is owned by America’s Cup sailor Brad Webb, who started ACSailingSF to give people the thrill of sailing on an America’s Cup yacht here – interest in the competition peaked in the bay when the 34th America’s Cup was held here last September, and US team Oracle won. New Zealander Brad has himself competed in Six America’s Cups and was on the winning team in 2010.

It’s a fun afternoon with lots of stories and anecdotes from the America’s Cup. When we reach the other end of the bay, near Bay Bridge, Jon points out where the America’s Cup finish line was and where the VIP Pavilion was. As I imagine the crowds who would have been lined up along the wharf, I almost expect a winning hoot as we cross the imaginary finish line…

Yvonne Gordon is a travel writer and sailor, see yvonnegordon.com or follow @yvgordon on Twitter. For information on the ACSailingSF experience, see www.acsailingsf.com