‘Ding. Ding, de-ding…’ The bells from the church tower resound all along the waterfront. They sound like real bells rather than a recording, but they are slightly out of sync, as if someone might be practising.

We’ve just arrived in Trogir, near Split on the Croatian coast, to board a traditional wooden boat and explore the Dalmatian Islands for the next eight days. Our tour leader Davor welcomes us on board, and we gather on deck with the 16 others who are taking the trip.

‘Welcome on board Sretan, which means “happy”,’ he says, before running through the boat rules – things such as ‘no diving off the top deck’.

‘We ring the bell for something really important,’ he says, ‘like a meal or we have to go somewhere.’ I start to like bells again. 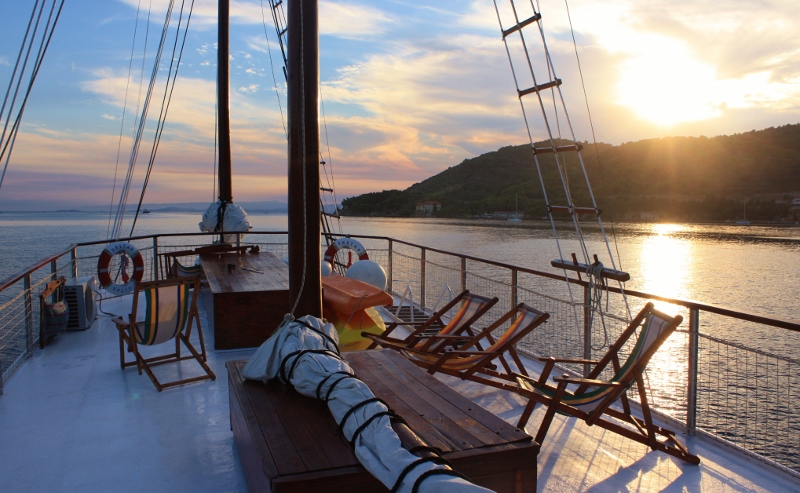 Once we’ve put our belongings into our cabin (and tossed for the top bunk), we have the evening to explore the historic town of Trogir, which is on its own tiny island. Much of Trogir dates back to the Middle Ages and it’s on the Unesco World Heritage list. There’s an old city gate, a cathedral and museums, all set in a warren of tiny stone streets, which come alive after dark with the smell of sizzling seafood and echoes of laughter from the taverns and restaurants in every nook and cranny.

The waterfront is the place for people – and boat-watching – the ‘yacht candy’ here ranges from huge motor cruisers and yachts to sleek speedboats, all zipping along the quay. The next morning we leave at sunrise for our journey out to the central Dalmatian Islands.

There are 1,000 islands here and only around 50 are inhabited. We motor along in the turquoise waters, passing lush, green, hilly islands with their pristine white rocky shores and crystal-clear water. At intervals there are stone houses with terracotta roofs, sometimes set around a small beach. It all looks idyllic.

The first island we visit is Hvar, where the quays are packed with cruisers and yachts. There’s a wide square lined with cafés, a church at one end and a small fruit and vegetable market. A small street at the back of the market leads to a path zig-zagging up to a fort on the hill. As we walk up through the trees, the air is filled with the sound of crickets. It’s a tough climb in the heat, but there are beautiful views over Hvar town and bay.

Lunch is back on board the boat – a delicious feast of mushroom soup, followed by red snapper, green beans and a red cabbage salad, with a traditional Croatian cake dessert. The chef has made enough for second helpings too.

Later we glide along the coast and everyone takes to the deck to relax for the afternoon – to sunbathe and read or chat. When we stop in a small bay, it’s time for swimming. With an air temperature of 30-plus, the water feels refreshingly cool, even though it’s about 24 degrees. 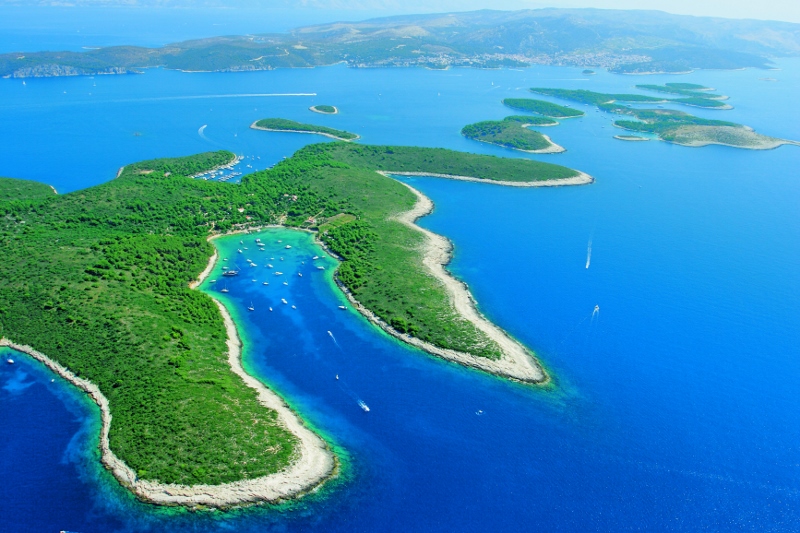 It’s crystal clear, and through my snorkel mask I see fish of all sizes and sea cucumbers on the sea bed. We also have two kayaks on board for exploring. Dinner is another feast – we tuck into vegetarian pasta and seafood spaghetti and then spend the night at anchor, some people sleeping on deck under the stars.

The next day, it’s on to the island of Korcula, via another swimming stop. This is the typical day all week – we’re on the move in the morning, spend the afternoon swimming and snorkelling, and in the evenings we explore whatever island town we are in. Every night we sleep on board the boat. Each cabin has two single wooden bunks and a sink. There’s a covered dining area, and a top deck with deckchairs for sunbathing. It’s basic but comfortable, and we’re well looked after by the captain and crew.

The walled city of Korcula is the supposed birthplace of Marco Polo. The house is derelict, but there’s a small tower to climb for views. Better views of the terracotta roofs and the streets below can be had in the bell tower of the Franciscan cathedral. If you’re exploring the narrow streets, you might notice a ladder going up into a castellated turret in the city walls. This is a buzzing roof-top cocktail bar, Massimo, where drinks are brought up by pulley.

We also visit the islands of Vela Luka, Brac, Šolta and Vis, which has a blue cave. The town of Vis has a true island feel, with palm trees and colonial-type buildings lending an exotic atmosphere. Everything is at a slow pace, and there’s even a tiny open-air cinema. Restaurant Lola, which has statues and lavender bushes between tables, is more like a garden than a restaurant.

On the last day, we arrive back to Trogir in the early evening to hear the bells ringing furiously from the church tower. They’re still out of sync, but it’s a welcome sound – like they are welcoming us back.