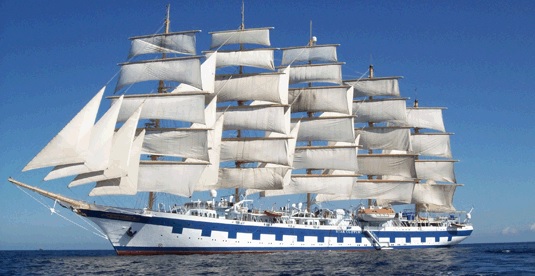 Looking up at the tangle of ropes and rigging swaying about like thread in the wind, I feel my knees go weak. Even as I clip on my harness, I torture myself with what-ifs. The crow’s nest, about one third of the way up the 80m mast, suddenly looks very far away. I start climbing up the wide rope ladder, holding on so tight my knuckles go white. It is terrifying, even though I am attached to a safety line. As a regular sailor, I have been up lots of masts but this is different – usually you are winched up in a bosun’s chair, this time you have to climb up the rigging yourself. A man who looks like he’s in his 80s puts me to shame by racing up the rigging with his eyes closed.

This is the deck of the Royal Clipper, the world’s largest fully-rigged sailing ship. At 134m (439 feet) long, it’s a stunning tall ship with five masts, 42 sails and a sail area of 5000sq m. Modelled on legendary clipper the Preussen, which was the largest and fastest sailing ship in the world when it was launched in 1902, it has the feel of a true classic. There are long teak decks and wood and brass everywhere and it’s not hard to imagine what sailing on a square rigger was like all those years ago.

The Clipper is three days into a week-long voyage from Civitavecchia (Rome) around Sicily and the Aeolian Islands. We leave Amalfi harbour in early evening and set sail for Sicily in warm sun and a light breeze. 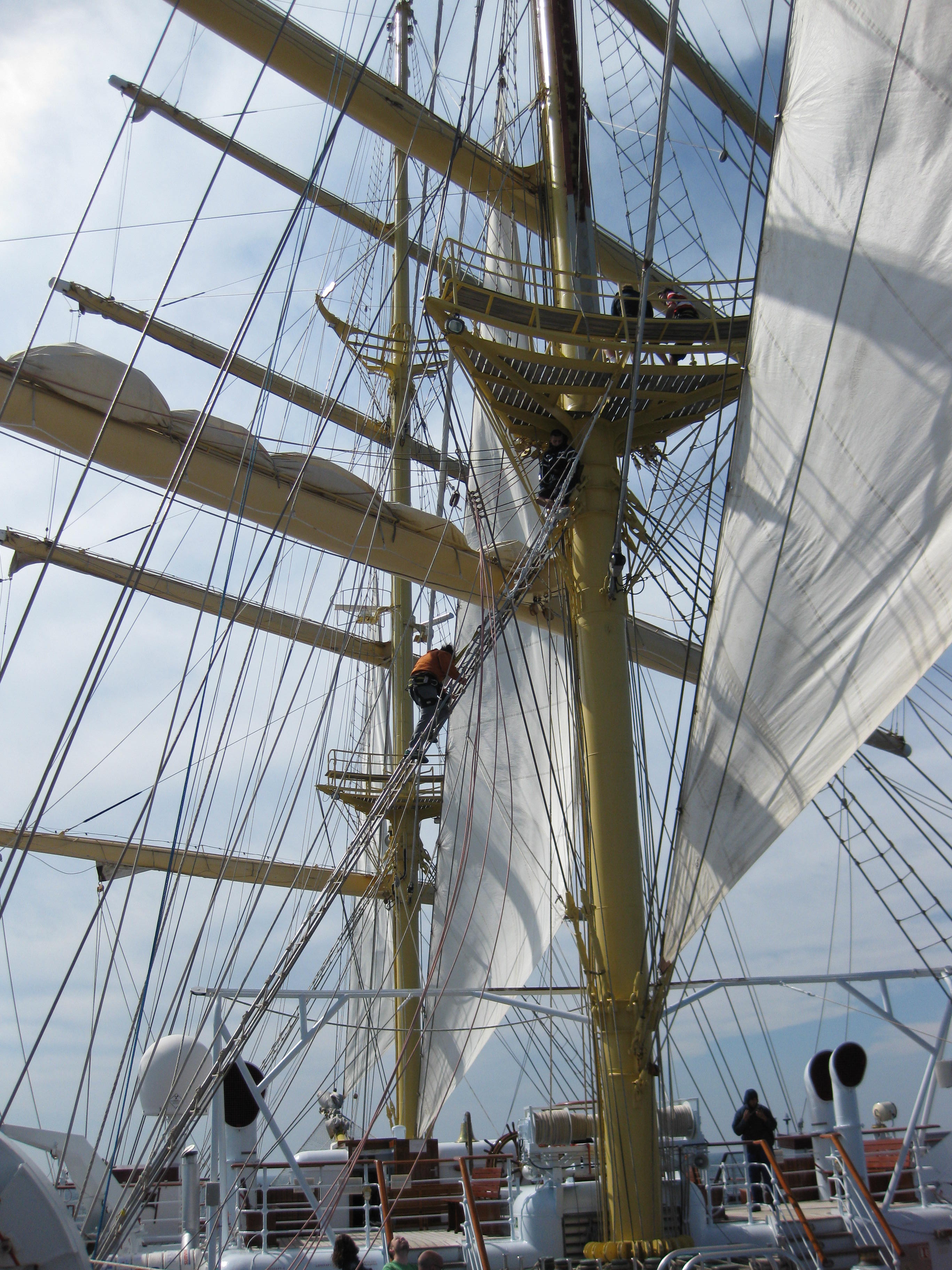 The giant sails unfurl slowly from the yardarms as we sail away from the harbour. The crew are unwrapping the top gallant staysails – just a few of this elegant tall ship’s many sails – and with a little added help from the engine, we set off along the Italian coast.

For a regular sailor, this is the ultimate adventure – sailing on the world’s largest sailing ship, and where better than the Western Mediterranean to do so. I’ve come for the sailing, with the added benefits of a cruise, however many passengers are here for a luxury cruise with some sailing thrown in: as this is a modern, high-tech re-creation of a clipper, with plenty of creature comforts. Cabins have air conditioning, a DVD player and an en-suite marble bathroom. There’s a gym, three deck swimming pools and a boutique. It’s not quite roughing it.

However passengers can get as involved in the sailing aspect as much as they want to – from hanging out in the bridge or handling sails, to taking out a small dinghy. As well as climbing the mast, another exhilarating if scary experience is to climb out at the bowsprit onto the massive net overhanging the bow and look down into the water far below.

The ship deck’s seems endless. Looking up, the masts reach towards the sky like a forest of uniform trees, each with five or six yardarms with corners of cloth sail peeking out. Along the deck, thick white ropes are neatly coiled on their posts, ready for action. The top gallant and royal staysails are set and we are powering along at 10 knots, in about 15 knots of breeze, heading for the Strait of Messina, the narrow stretch of water between Italy and Sicily. In the bridge (there is an ‘open bridge’ policy), the chief engineer answers questions and takes out the charts of where we will be going.

At the centre of the ship is a light-filled atrium with a gold-edged spiral stairs leading down to the dining room. Meals are informal and you are seated by the maitre d’ with other guests as you arrive – and the food is delicious and not too heavy. 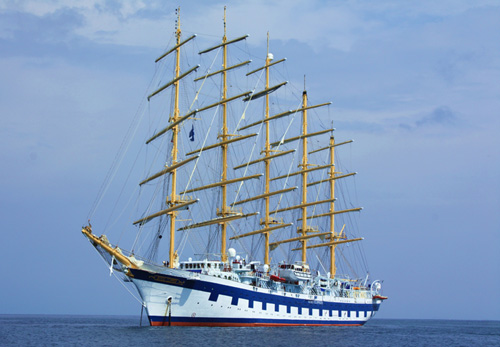 At dinner, everyone is full of chat about their day. At the table is the ship’s captain, Captain Vlad, Mariano, a marine biologist who is travelling on the ship for a month, two eco-travel writers and an Australian couple. People swap stories and the captain tells us about the ship’s previous adventures. After dinner, there is a crab race in the bar. Some passengers go up on deck to see the stars. They are magnificent. The crew switch off the deck lights and the full magnificence of the night sky is revealed.

The ship’s library is stocked with books, newspapers and sailing annuals, ideal for bed-time reading. Back in the cabin, the moon outside the porthole is reflecting onto the water as we power along and I am lulled to sleep by the gentle swaying of the boat.

The next morning, daybreak brings the first light through the porthole. We are approaching Sicily and before us is Mount Etna, its vast snowy tip visible over a bank of clouds. On deck, with this stunning backdrop, it’s Captain Vlad’s storytime, when the captain tells us some stories about the ship and the adventures of old-time clippers such as the Preussen. The ship, launched in 1902, was built to be able to round Cape Horn in heavy weather.

When the anchor is dropped, the ship’s tender takes us over Giardini Naxos, Sicily’s oldest Greek city. From there, it’s a taxi up to Taormina, a pretty town up in the hills where the narrow streets are lined with old stone buildings, art and tasteful shops and cafes. Its Greek and Roman amphitheatre offers spectaculare views over the bay and of the ship anchored far below, as Mount Etna looms in the background. 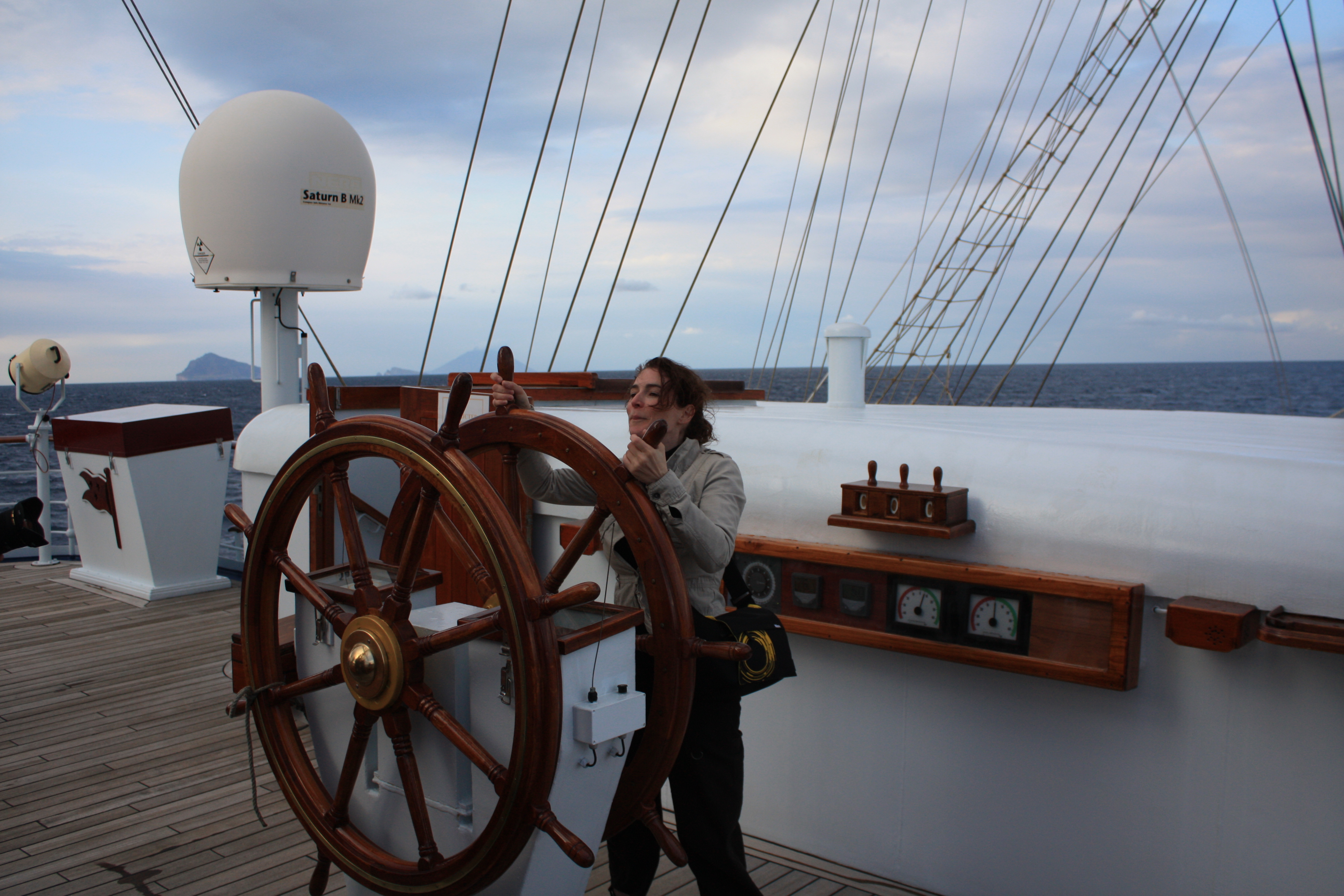 The next morning we arrive at the Aeolian Islands, an archipelago of seven small volcanic islands, and some of us take the first tender off the ship. Halfway across to Lipari harbour, we are soaked in a huge rain squall that develops into a tropical downpour. The rain puts paid to a planned boat tour to the neighbouring island of Vuclano, which has three volcanoes. Disappointed, I enquire about renting a boat from the pier and meet a like-minded passenger. We soon discover we can get a hydrofoil to Vulcano.

Halfway through the ten-minute journey, there are loud claps of thunder and flashes of lightening. We wonder what would happen if we get hit. But we make it safely to the little port and walk around to the thermal wells, finding them by following a strong smell of sulphur.

It is still lashing rain but walking into the warm mud baths, made up of warm salt water and clay mud, it’s easy to forget about the downpour. The ground is soft and gooey underneath and the water on the top is brown and warm. Every muscle in my body seems to relax. I glide around, searching for warm patches and rubbing mud into my skin. A small fumarole – a volcanic vent from which steam and hot gases escape – bubbles just off shore and as I swim out to it, the mud washes off. Althought the sea is cold, I feel it warm up as I draw closer to the bubble. The rain is coming down as the steam spirals up from the surface – it all feels surreal.

At sunset, we sail past Stromboli, an active volcano which is giving off a cloud of smoke from its top. At dinner, I realise that I stink of sulphur from the mud baths but nobody comments.

We spend the final day at sea sailing back to Rome and we see whales and dolphins off the starboard bow. There is lots to do: mast climbing, knot-tying on the bridge and a visit to the engine room.

As a sailor, I love to feel a boat heeling under the force of full sails and the wind in my hair. I never quite get that feeling on the Clipper but the winds are light and the sails are never all up. However the adventures I have, as well as the spectacular photo opportunities and interesting dinner conversations, make it a very special trip. Returning to land, it takes three whole days to stop feeling the boat’s rocking motion and I dream of the ship and portholes and volcanoes for days afterwards.

© Yvonne Gordon. This article was first published in The Irish Mail On Sunday