Lured by splendid isolation, Yvonne Gordon goes back to nature and finds a pristine frontier in a remote Burmese archipelago

The large white shell on the beach, tucked behind a rock, had a long pattern of double tracks leading to it. Something, perhaps a crab, had crawled into it quite recently. It seemed like the only footsteps of any kind on the whole tranquil beach, a lush tropical setting of one of the islands in the Myeik Archipelago in southern Myanmar. As with most of the other 800 uninhabited islands here in the Andaman Sea, the land is full of thick green jungle, with strips of long golden beaches on the edge.

There are no roads to these beaches, no promenades, loungers or umbrellas, no man-made structures of any kind, just nature. We sailed here on a 52-foot catamaran yacht, a small group of travellers lured by the remoteness and isolation, and by the stories of tigers and sea gypsies that might be on the islands. We were spending a week navigating the archipelago, exploring empty beaches, snorkelling, swimming and watching the sun rise and set from quiet anchorages that we were the only occupants of; the only traffic we saw was the odd passing squid fishing boat and once or twice a dive boat.

Although visitor numbers to Myanmar, formerly Burma, have been steadily increasing since the tourism boycott was lifted – two of us had just spent two weeks backpacking around Yangon, Mandalay and the north – government restrictions make these islands difficult to access, so being here felt like the ultimate adventure. 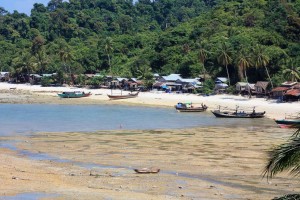 We arrived at 115 Island in the late afternoon, the first island where we encountered people. Soon after we anchored, two small wooden boats with children in them rowed out to greet us. This was our first encounter with the Moken, or Sea Gypsies. The children were shy but seemed delighted when our skipper gave them some biscuits and they quickly rowed off, back to shore.

When we landed on the island later in our dinghy, we met two or three Moken families and saw their spartan camp set out beneath makeshift wooden shelters under the trees on the beach. These families travel around the islands in a convoy of small wooden boats, staying on an island for up to two months, fishing and diving for sea cucumbers, until the rainy season when they go back to their base at Nyaung Wee. It is said Moken children can see as well underwater as above it. Maung Hein Tun, or Hein for short, our Burmese guide, chatted to them and translated a couple of questions for us, but the conversation was mostly nods and smiles.

After bidding them farewell, we walked through the jungle to the beach on the other side. The rainforest rang with buzzing insects and birdsong, some of it sounding like monkeys laughing. Twigs snapped underfoot and long vines and plants entwined in front of us as we followed a narrow path through the undergrowth. ‘Watch out for prickly branches,’ Hein warned, as he waved a stick in front of him in case of any large spider webs. The canopy was so thick that the sunlight was closed out, and I was afraid to look too much at the ground in case of snakes. The empty beach was fringed with turquoise water, the white sand dry and powdery, full of white shells and white crabs busily scurrying about. Further back from the shore, tiny balls of sand were set out in geometric patterns around holes made by crabs sifting through the sand. 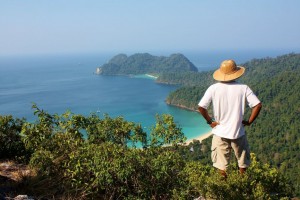 View from a hill on Macleod Island in the Myeik Archipelago

I realised how alive beaches are when undisturbed by mankind, and also, for the first time in my life in nature, I thought of Darwin and species and beginnings of life and how all sense of time can fade away when confronted with such a natural setting. ‘I love it here.

Everything is alive. Every shell is alive,’ said our skipper Michael Forbes when we told him later about the shells. ‘I have been to the most beautiful beaches in the world and everything, all the shells are dead,’ he said. ‘Here the shells on the beach will run away from you. A guy brought a shell onto the boat recently and it started moving.’

When we – seven guests – had joined the boat with its crew of three and a guide, two days before, Michael told us we would visit pristine islands where the beaches don’t have footprints, where anchorages aren’t shared. ‘This is a special place. You are lucky to be here now, right at the beginning. This trip changes people,’ he said.

The first morning we saw dolphins jumping off the port bow and later a sea eagle circled behind the boat, eyeing our fishing line. As we approached the first islands, I admired the thick green rainforest with long beaches at the bottom, their sand glowing gold in the sun, like the golden pagodas all around the country. We went snorkelling and saw parrot fish, butterfly fish, domino fish, grouper, snapper and sea anemones. Anchoring at night for sunsets we tucked into curries, rice, tea leaf salad and fish caught that day. The clear night skies were lit by stars, and there was not a sound as we fell asleep gently rocked by the boat. 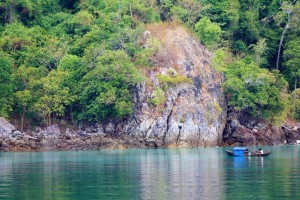 We saw ‘symphonies of fish’ – a glittering display of small silver sprats leaping into the air, and a big sailfish jumping off the starboard bow, its dorsal fin like a rainbow. We heard stories about what might be on the islands – like the elephants said to be left behind when loggers were arrested. I had read of tigers, too, and Michael said he once saw the huge print of some type of large wild cat in the sand.

On Swinton Island we took the dinghy to the beach and collected firewood for a bonfire and barbecue. It was a bright night and, after we ate, Michael took us to a freshwater river to see mud hoppers, a strange almost translucent species that looks like a cross between a frog and a fish.

Most of these islands are unexplored and scientists believe they may discover new species now that these remote parts of Myanmar are opening up, although access is still limited – very few boats have permits to sail around these islands (only two yachts and a handful of diving boats).

Later in the week, we visited Bo Cho, one of the only inhabited islands where many Moken have settled. As we motored in to the long curved beach lined with palm trees, the shore was full of wooden fishing boats. Shy at first, the village children soon swarmed around us, giggling and playing, and they held our hands as we walked through the village, leading us up the steps to the temple and taking us to see a captive crocodile.

As we were leaving and wading out to our dinghy, a small dark-haired girl with white thanaka paste on her face approached me and pressed a shiny white shell into my hand. A parting gift. We exchanged smiles. But this was not just a pretty, empty shell. I could feel by the weight of it there was something alive inside it. I didn’t want to separate it from its home so I discreetly liberated it back onto the sand just before we set off.

I was happy to take away the memory, but wanted to tamper as little as possible with the ecology of this special place.