Yvonne Gordon finds the cool blue waters off the cayos of northern Cuba, which were favoured by Hemingway, ideal for a day of sailing after a few days of exploring the island by road

I jumped into the sailing dinghy, grabbed the tiller and pointed it out to sea. As the boat took off into the wind, it felt like total freedom, an escape — from an island off northern Cuba. 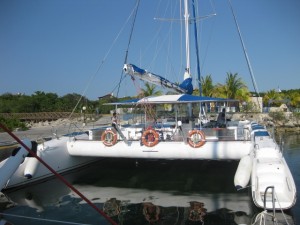 We had just spent a few hours sailing in Cuba, from Cayo Santa Maria to Cayo Guillermo, two islands off the north coast, on a catamaran yacht.

Set up for day trips, the catamaran had plenty of space. It was 64 feet long and had two hulls. At the bow, between the two hulls, there was a large trampoline to lie on. In the centre, there was a shaded area and a bar, with bottles of rum lined up behind the counter and a fridge full of cold drinks. At the back, a row of buoyancy aids hung across the rail; a container of snorkels and flippers close by.

Myself and a handful of passengers boarded early in the morning and set about spreading ourselves around the deck, some choosing to lie up at the bow in the sun; others chatting in the shade or checking out the offerings of the bar. We were soon underway, as the crew hoisted the main sail and then unfurled the large headsail, which soon caught the gentle breeze. 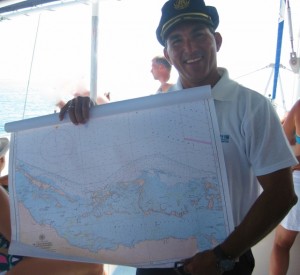 Cayo Santa Maria and Cayo Guillermo are two islands in the Jardines Del Rey (Gardens of the King), a string of islands set along a coral reef system north of central Cuba. A 48-km long causeway was built to connect the cayos to the Cuban mainland in the 1990s, and in the last ten years or so, the coastline along the pristine long white beaches has become home to a row of all-inclusive hotel resorts.

On board the catamaran, the skipper Juan Miguel Sanchez showed us our course on a chart, which would take us out past Cayerias Los Caimanes — the Caiman Islands. This is a group of tiny islands which from the air look like different parts of an alligator – caiman in Spanish.

“We’ll stop halfway at Faro de Caiman Grande,” said Juan Miguel, telling us stories about the lighthouse at the small island of Cayo Caiman Grande de Santa Maria, which dates back to 1897.

These are Hemingway waters. The Nobel-prize-winning author fished here on board his boat the Pilar and during World War II, he hunted for German submarines here. Later, the area was the inspiration for The Old Man And The Sea and his posthumous work, Islands In The Stream, where he described the coconut trees, the mangroves, sandy beaches and the emerald green and turquoise-blue seas 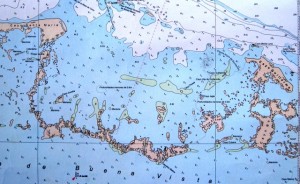 The waters around the cayos are a diving and fishing paradise — with 900 different species and the adjacent waters of the Old Bahamas Channel offering deep-sea fishing and giant Old-Man-And-The-Sea-sized marlin.

Along the way, we spotted starfish under the water, their black outlines standing out in the light green sea. When we stopped for snorkelling near the lighthouse, the water was full of fish. Nosy stripy fish swam right up to my mask. Parts of an underwater shipwreck — a large barrel and hull pieces — were by now covered in beige coral, while more colourful pieces of coral swayed in the current. 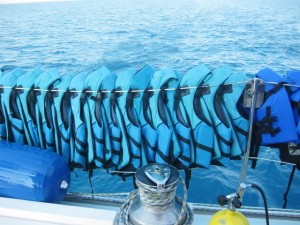 Our final destination was Pilar Beach, where, as part of our daytrip, there was lunch set up for the group in a tent on the beach. I could see the tables and chairs, the seafood buffet, the musicians getting ready to play and the small tender making its way out to collect us as we anchored off the beach.

But, for the last few minutes of our sail towards the beach, we had been accompanied by some colourful dinghies from the resort. The dinghies are available for guests on the island’s resort to use, and, as we were going to be staying there, that is when I started planning my escape.

Before going sailing in Cuba, we had spent days exploring Havana, and then travelled by bus to the towns of Santa Clara and Remedios and the Cayos. We’d seen museums, cigar factories, musicians, traditional dances and ranches. It was fascinating, but it was hot and the roads were dusty and bumpy. Which is why sailing offered the perfect contrast of peace, fresh air and cool water, and I wasn’t quite ready to go back in to land yet.

The skipper Juan Miguel whistled to one of the dinghy helms and, after a short conversation between the three of us in Spanish, I jumped down from the yacht onto the dinghy and met another Juan – one of the guides in charge of the dinghies at the resort.

He handed me the tiller and smiled. “You’re the skipper now,” he said, as the wind picked up and we set sail for a little island with two or three palm trees on it, out on the distant horizon… 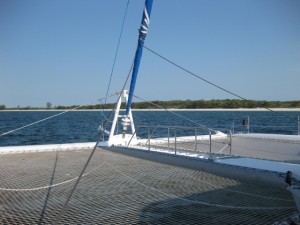